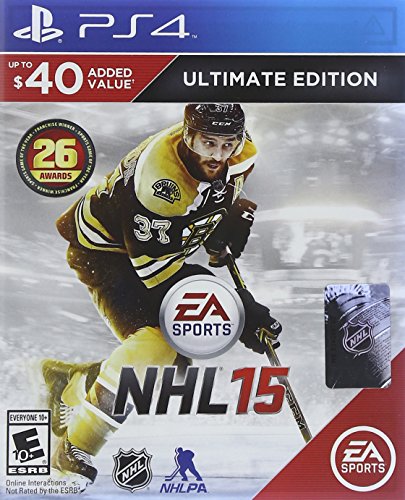 EAN
0012301023602
Brand
Electronic Arts
Built to harness the power of the next generation console - NHL 15 brings hockey to life the sights, sounds and feel of real NHL action like never before. Every player is affected by real-world physics leading to multiplayer collisions and pileups through 12 Player NHL Collision Physics. NHL 15 welcomes Mike ‘Doc’ Emrick, Eddie Olczyk and analyst Ray Ferraro providing insight through revolutionary real life visuals all presented in an authentic NBC Sports Broadcast Package. This is the next generation of Hockey.

Kick start your Hockey Ultimate Team with the NHL 15 Ultimate Edition. With over $40 added value of exclusive content, you’ll have everything you need to dominate the hockey world.

KEY FEATURES
• True Hockey Physics — For the first time in any sports game, real-world physics affects every player through every on-ice collision with the new 12 Player NHL ® Collision Physics. Completely rebuilt Real Puck Physics result in a more realistic feel to every puck interaction. Everything on the ice, including the ice surface itself, is live which leads to the unpredictable and authentic puck spins, rolls and bounces seen in a real NHL game.

• The Next-Generation Hockey Player — The Next Generation Hockey Player has been rebuilt from the ice up using Authentic Player & Equipment Models which has three distinct layers - the body, equipment, and jersey. Each layer interacts independently, making every contact with the puck or other players even more realistic. Combined with Unprecedented Player Likeness NHL 15 delivers groundbreaking player likeness, emotion and animation.
• Superstar Skill Stick — Now all the tools of an NHL superstar are in your hands. The revolutionary Skill Stick has evolved to give even more control to the player. Protect the puck, receive passes without breaking stride, and discover an arsenal of sweet new dekes, all with an intuitive right stick control scheme that is easy to use but packed with depth.

• World Class Broadcast Package — Witness the sights and sounds of authentic arenas across the National Hockey League, as 9,000 individual crowd models - the most ever in a sports videogame - hang on every play called by an all-new three man commentary team. In addition
Loading offers ...
* The prices and shipping costs may have changed since the last update. It is technically not possible to update the prices in real time. The time of purchase on the Website of the seller is used as the reference.