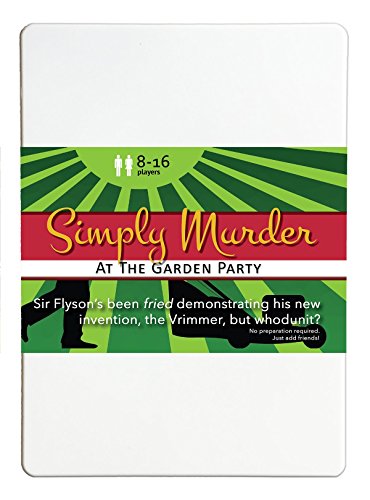 EAN
5060103770328
Brand
Murder Mystery Flexi Party
Sir Richard Flyson is holding an exclusive garden party and barbeque at his summer residence to demonstrate his latest invention - a vacuum powered strimmer called the Vrimmer. But when Sir Flyson flicks the switch - well, let's just say the sausages aren't the only things that got burned. It looks like murder... but whodunit

Play using any of the following characters (minimum of 8)*:

Simply Murder takes the hassle out of hosting with a pick-up-and-play kit that needs no preparation. You don't have to send out invitations or dress up (unless you want to). Just hand out the roles and let the fun begin!

Each player is given a character sheet containing a scripted introduction and key facts - there aren't any scripted questions or answers, leaving you completely free to improvise your role (acting tips are included)! Audio narration from Inspector Basset drives the game forward over three rounds, so you can play along with your friends - even the host doesn't know whodunit!