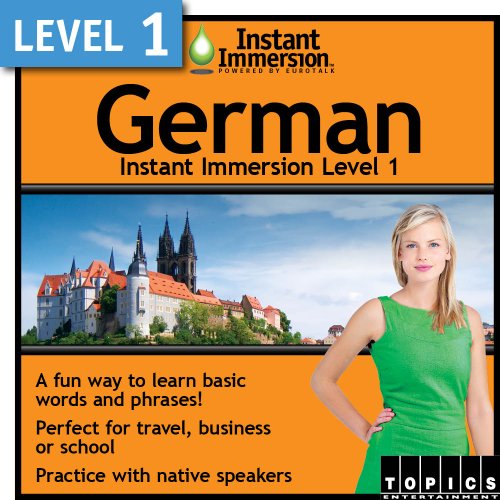 Instant Immersion is fun and easy to use! It is the perfect way to learn a new language for travel, business or school. Instant Immersion Level 1 uses natural image association techniques to help you learn as easily as you learned your first language. Learn basic vocabulary and everyday phrases in no time! Instant Immersion Level 1 teaches you the essential words and phrases you will need in order to get around with ease. Topics include first words, food, colors, phrases, body parts, numbers, time, shopping, countries and more. Practice your new language with virtual flashcards, play games and use the advanced record-and-playback feature to practice pronunciation. Even print out a picture dictionary for learning on the go!

WHY LEARN GERMAN
- Germany has more than 369 million visitors a year.
- German is the most widely spoken first language in the European Union.
- There are nearly 50 million people with German ancestry in the United States.

Visiting Germany
More than 369 million people visited Germany in 2010. It’s no wonder. Germany has an appealing mix of modern city and rugged countryside. Whether it’s Oktoberfest or a football game in Munich, or hiking or skiing in the German Alps, the variety of things to do in Germany makes the country an attractive destination for vacationers.

German-speaking Countries
German is one of the world’s major languages with about 100 million native speakers, most of them in Germany. But it is also the most widely spoken language in all of the European Union. If you travel in Europe, you will come across German-speakers, road signs, menus and more in other countries, including Austria and Belgium, as well as in parts of Italy and Switzerland.