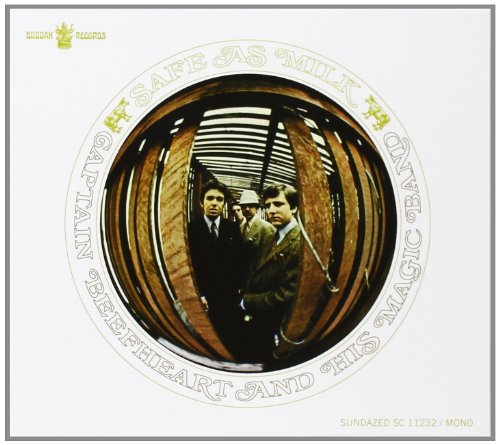 EAN
0090771123220
Brand
Captain Beefheart
Captain Beefheart's 1967 debut album Safe As Milk introduced the world to a one-of-a-kind visionary whose unique output had no precedent in contemporary music. Beefheart, aka Don Van Vliet, filtered the raw influence of the blues and R&B through his own singular musical sensibility and left-field lyrical wordplay, and surrounded himself with some of the most talented and inventive young musicians around. The result was an album that, even in the heady year in which it was released, sounded like nothing else, and the stage for one of rock's most iconoclastic and idiosyncratic careers.

Now released on LP and CD by Sundazed Music, this landmark album now sounds the way it was meant to sound, thanks to the restoration of Perry's rare original and, to most fans, superior mono mix, which was later altered by Beefheart's label without the artist's involvement. Both the LP and CD version of this definitive edition feature authoritative new liner notes by Rolling Stone editor and longtime Beefheart enthusiast David Fricke.

In mono, Safe As Milk is a powerful, concentrated revelation, Fricke writes, further noting, ;Safe As Milk promised comfort, exotic nourishment and rude health and delivered. Created in a year rich in historic debuts and transformative statements about rock's dynamic and expressive possibilities, Safe As Milk was so far in it was out.

CD version features a four-panel digipack containing all artwork elements. The LP version includes a lovingly-restored sleeve, an insert containing the original custom sleeve art, plus the famous & Bye-Lo Baby & Safe As Milk sticker and the album, pressed on 180 gram vinyl.
Loading offers ...
* The prices and shipping costs may have changed since the last update. It is technically not possible to update the prices in real time. The time of purchase on the Website of the seller is used as the reference.

The British Invasion ...
Powerline: The Best ...
Dangerous Toys
Catch The Rainbow: ...
Tom Petty & ...
Fahrenheit
Homeland
Blowing the Fuse: ...
The Continuing Story ...
Best Of Black ...
The Whole Thing ...
Monolith
The Basement Tapes ...
The Freewheelin' Bob ...
Live in Japan ...
We use cookies to ensure that we give you the best experience on pricepirates.com. Privacy Policy