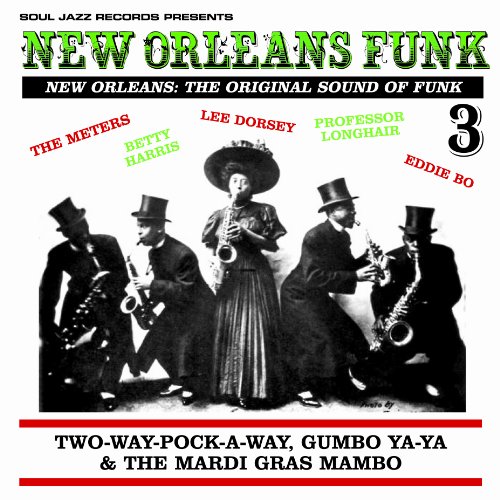 EAN
5026328102689
Soul Jazz Records 'New Orleans Funk' series of releases really define the unique sound of New Orleans.
New Orleans long musical journey begins at Congo Square with the creation of jazz, the original Creole culture clash of African heritage and European instrumentation.
The syncopated beat of the second line jazz parade bands, the secret language and dances of the Mardi Gras Indians, the mambo and Latin rhythms of Professor Longhair, and the joyous funeral processions all help make New Orleans a unique musical melting pot.
In the 1960s and early 1970s the creative powerhouses of Allen Toussaint, The Meters, Eddie Bo and others made New Orleans the birthplace of the original sound of Funk.
Here a seemingly endless line of amazing singers - Lee Dorsey, Betty Harris, Willie West and Eldridge Holmes, amongst many others - released a constant stream of stunning 45s, backed by the super funky Meters and produced by Allen Toussaint. The multi-talented Eddie Bo similarly wrote and produced for an elite set of artists, including The Explosions, Chuck Carbo and others.
In the 1960s and early 70s, limited local record distribution meant that many of these artists' releases remained unknown outside of the city borders and, as a consequence, many of these records are serious collector's items today.
Add to this the syncopated polyrhythm funk of Mardi Gras Indians, a rare version of the carnival classic 'Two-Way-Pock-A-Way', and the parade band jazz of the Rebirth Jazz Band (with their version of the Blackbyrd's classic 'Do It Fluid') and you have the latest installment in Soul Jazz Records' classic 'New Orleans Funk' series.
Loading offers ...
* The prices and shipping costs may have changed since the last update. It is technically not possible to update the prices in real time. The time of purchase on the Website of the seller is used as the reference.