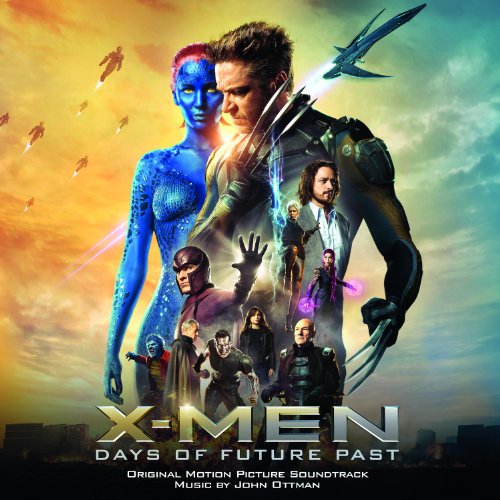 
About the Music
Composer/editor/director and California native John Ottman's passion for music and film began at a young age in San Jose. Years spent making short films in his parent's garage eventually lead the young auteur to USC, where he graduated from the university's prestigious School of Cinema-Television. It was there where he met future collaborator Bryan Singer, with whom he would go on to compose the music for and edit The Usual Suspects, Apt Pupil, X-Men 2, and Superman Returns. He has also scored films for other directors including Ben Stiller's Cable Guy, Joel Silver's Gothika, John Badham's Incognito, and Shane Black s Kiss Kiss Bang Bang as well as edited, composed and directed the film Urban Legends: Final Cut.


About the Movie
The ultimate X-Men ensemble fights a war for the survival of the species across two time periods in X-MEN: DAYS OF FUTURE PAST. The beloved characters from the original X-Men film trilogy join forces with their younger selves from the past, X-Men: First Class, in order to change a major historical event and fight in an epic battle that could save our future. Directed by Bryan Singer, X-Men: Days of Future Past features an all-star cast that includes Jennifer Lawrence, Hugh Jackman, Halle Berry, Michael Fassbender, Ellen Page, Ian McKellen, Patrick Stewart, Peter Dinklage and James McAvoy. The movie opens in over 2, 000 theaters nationwide on May 23, 2014.

x-menmovies.com
sonymasterworks.com
Loading offers ...
* The prices and shipping costs may have changed since the last update. It is technically not possible to update the prices in real time. The time of purchase on the Website of the seller is used as the reference.

Christine's Refrigerator
Aristocrats / Culture ...
Summary of Shoe ...
Tracks From the ...
Legendary (Radio Version) ...
Diet Soda Junkies
Les Joyeux Savoyards
Gears of War ...
Steel Umbrellas (2015 ...
Washing Machine [2 ...
The 80's: Tiffany
Burberry Acoustic: Collection ...
Barista Ep
Under the Table ...
Lifeology 101...Back 2 ...
We use cookies to ensure that we give you the best experience on pricepirates.com. Privacy Policy