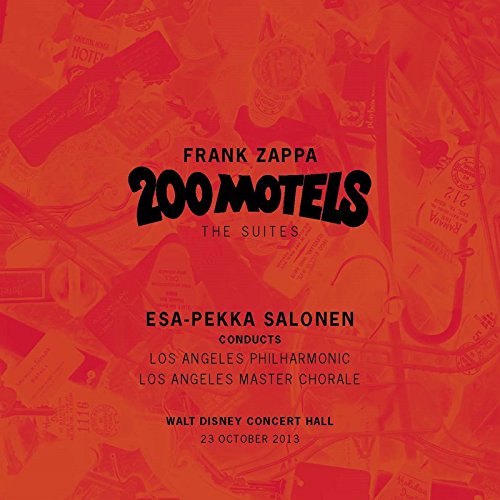 EAN
0824302001929
Brand
CD
On the evening of October 23, 2013, Walt Disney Concert Hall was the place to be in Los Angeles, as Esa-Pekka Salonen conducted the Los Angeles Philharmonic and the Los Angeles Master Chorale in a spectacular, sold-out orchestral performance of Frank Zappa's 200 Motels (The Suites). Recorded for posterity, the acclaimed, one-night-only 13-suite performance of Zappa's 1971 masterwork will be released worldwide on November 20 by Zappa Records/UMe.

This 2CD release's expertly recorded audio brings the listener back to Walt Disney Concert Hall to experience the exciting 200 Motels (The Suites) spectacle, complemented by photos from the evening and essays by the show and recording's producers, Gail Zappa and Frank Filipetti, the evening's director James Darrah, 'Scoremeister' Kurt Morgan, and performers including Diva Zappa, Michael Des Barres, special guest 'Rock' rhythm section drummer Joe Travers, and former Zappa band member Scott Thunes. Essays by some notable members of the audience, including Steve Vai and Peter Asher, are also included.
Loading offers ...
* The prices and shipping costs may have changed since the last update. It is technically not possible to update the prices in real time. The time of purchase on the Website of the seller is used as the reference.

Phil Collins - ...
Eyes of Love
Devinyl Splits No. ...
Fallen Angels
Men in the ...
Genuine Imitation Life ...
The Healing Garden ...
Burberry Acoustic: Collection ...
lullaby and... The ...
Mirror
No One Can ...
Joni Mitchell - ...
Rock 'n' Roll ...
Chapel of Love: ...
Diet Soda Junkies
We use cookies to ensure that we give you the best experience on pricepirates.com. Privacy Policy