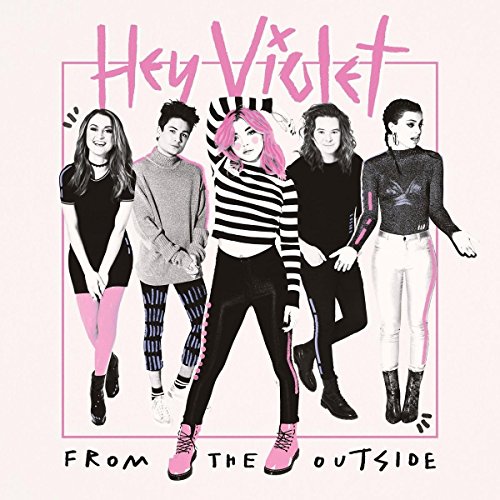 EAN
0602557570908
Brand
Capitol
Hey Violet's debut album, From The Outside, is now available for pre-order. Album was co-written by the band and produced by Julian Bunetta. Their new single, 'Break My Heart' Idolator says is a 'monstrous electro-anthem' and declares, the band is 'destined to have a massive year.' Alternative Press calls the track 'irresistible, ' while Nylon raves, 'Hey Violet knows how to write a good pop hook and 'Break My Heart' is a testament to that. This song has spunk.'

'Break My Heart' is the follow-up to Hey Violet's smash single 'Guys My Age'. 'Guys My Age' was named one of the Best Songs of 2016 by The New York Times, who called it 'teen-pop's revenge: an urgent dark song about sexual rebellion' and one of the 20 Best Songs of 2016 by V Magazine. Hey Violet was dubbed an Artist Primed For A Breakout in 2017 by Billboard, and a 2017 Artist To Watch by The Guardian, PopCrush, and more.
Loading offers ...
* The prices and shipping costs may have changed since the last update. It is technically not possible to update the prices in real time. The time of purchase on the Website of the seller is used as the reference.

Sittin' In (180 ...
The Beatles : ...
Genuine Imitation Life ...
A Cheap and ...
The Best of ...
Summary of Shoe ...
Chapel of Love: ...
Special Occasion
Diet Soda Junkies
Steel Umbrellas (2015 ...
Halo 2 Anniversary ...
30 Something
Playlist: The Very ...
Melophobia
Christine's Refrigerator
We use cookies to ensure that we give you the best experience on pricepirates.com. Privacy Policy