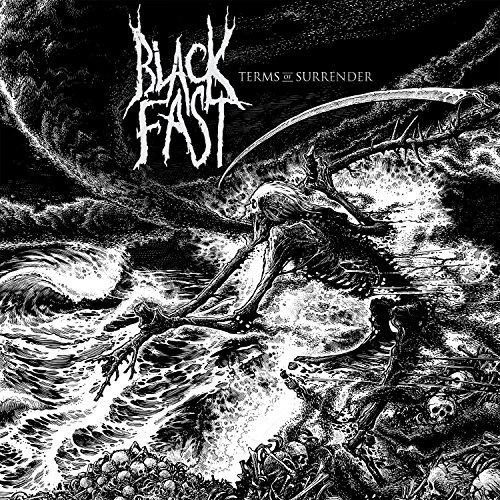 Creating a modern twist on the energetic riffs of metal s glory days, BLACK FAST harness the spirit of their metal forefathers, whether exploring hand-cramp-inducing riffs or blazing through straightforward thrash. BLACK FAST songs have a hungry ferocity reminiscent of the Bay Area thrash scene, the likes of which haven t been this raw or hyper-charged in decades.

BLACK FAST has the musical chops to move seamlessly between the progressive licks of Voivod and the scorched-earth devastation of vintage Megadeth with reckless abandon and a bleak but empowered vibe as wrought by the Midwest. Both guitarist Trevor Johanson and bassist Ryan Thompson have jazz degrees. Drummer Ross Burnett has been playing since kindergarten while Akin knew he wanted to be in a metal band very early in life.

Since 2011 BLACK FAST has fit right in on lineups with thrash revivalists like Havok, Battlecross, Revocation, Toxic Holocaust and Warbringer and modern metal merchants like Cavalera Conspiracy and Shadows Fall. BLACK FAST won the 2012 St. Louis Headbang for the Highway, contest and played the Sumerian Records stage at the Rockstar Energy Drink Mayhem Festival in Kansas City.

In 2013 MetalSucks selected BLACK FAST as one of the best unsigned acts in their Unsigned and Unholy column and the band's self-released EP Starving Out the Light nabbed Best of the Year nods by Metal Storm and No Clean Singing. Standout tracks Progenitors of Predation and Starve display the mix of thunderous thrash, filthy riffs and full-on swagger that is BLACK FAST.
Obelisk has become the band s calling card, instantly connecting in the live setting, like Black Fast s very own Angel of Death.

BLACK FAST s soundtrack to society s collapse is relentless. Possessed by unbridled energy and a palpable desperation, the band has a fierce vitality that will not go unnoticed. Watch for their label debut on eOne Music in 2015.
Loading offers ...
* The prices and shipping costs may have changed since the last update. It is technically not possible to update the prices in real time. The time of purchase on the Website of the seller is used as the reference.

Tiles (Special Edition)
Dimension Hatross
Battel Bratt
Life Turns Electric
Offensive to All ...
Wrath of the ...
Armed With Rage
Vendetta / Haymaker [Vinyl]
Critical Hit: Volume ...
Age of Tyranny
Spectre Abysm
Quasi-Hallucinogenic Sonic Landscapes
80402600162
The Chronicles of ...
Ocean Spray Light ...
We use cookies to ensure that we give you the best experience on pricepirates.com. Privacy Policy