Blowing the Fuse: 31 R&B Classics That Rocked the Jukebox in 1958 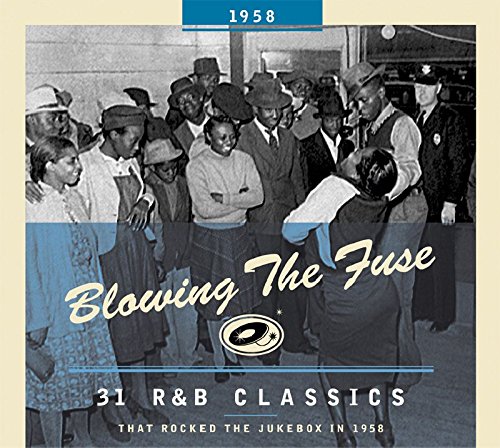 EAN
4000127167132
Brand
Various - Blowing The Fuse
The annual committee of the German record review awards has awarded the CD series Nowadays, when journalists talk about '50 years of pop music' they are ignoring the fact that popular music existed prior to 1955. Pop music did not appear from nowhere but has a rich 'pre' history. Keywords like Big Band Sound, Gospel, Jump Blues, Vocal Groups and Boogie Woogie characterize this period. The first eleven compact discs in the 'Blowing The Fuse'-series are a compilation splendid in sound and detail, dealing with important years in the progress of pop music in the range of black r&b, imaginatively compiled by the Canadian collector and DJ Dave 'Daddy Cool' Booth, and knowledgeably annotated by Hank Williams-biographer Colin Escott.
Berlin, November 19, 2005 THE NEW GOLD STANDARD IN R&B REISSUES IS NOW COMPLETE! Critics raved. Finally a series that really made sense of the wealth of music from R&B's early years! Now that series is complete. Here are the years 1956-1960, and here's why 'Blowing The Fuse' will be the standard for R&B reissues now and forever!
YEARS! YEARS! YEARS! Many companies have issued compilations of out-of-copyright recordings (ie. records more than 50 years old). That's why you'll find that their series stop at 1955. Bear Family's 'Blowing The Fuse' starts at the dawn of the Post-War R&B era in 1945, and now goes through until 1960! And, unlike the out-of-copyright labels who won't get to 1960 until 2011, we're there now because Bear Family pays the companies that own the music
PACKAGING! PACKAGING! PACKAGING! Other labels lift photos from old books and magazines, and commission quickie liner notes that tell you little or nothing, and often get it wrong. Bear Family's 'Blowing The Fuse' has detailed song-by-song notes, stories behind the songs, and incredible never-before-seen photos in huge booklets ...
Loading offers ...
* The prices and shipping costs may have changed since the last update. It is technically not possible to update the prices in real time. The time of purchase on the Website of the seller is used as the reference.

Homeland
The Beach Boys ...
ELECTRIC COMIC BOOK
Natural Progressions (Limited ...
Amazing Adventures of
Cheap Trick - ...
Live At New ...
The Breaking of ...
The Capitol Albums,  ...
Love Her Madly
Monolith
Tom & Jerry
Kettle of Fish ...
The Beatles - ...
Fat Mattress
We use cookies to ensure that we give you the best experience on pricepirates.com. Privacy Policy