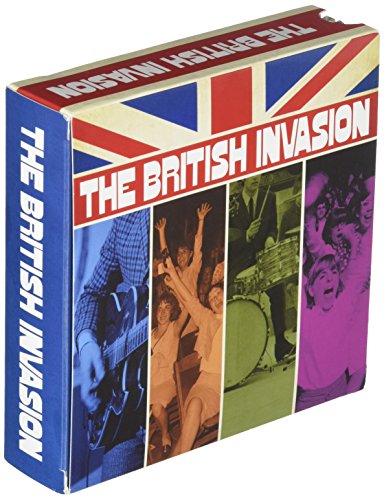 IT CAME FROM ACROSS THE POND…

Bold new sounds and influences from overseas turned into a social and cultural phenomenon that transformed pop culture in the ’60s. From 1964 to the end of the decade, American shores were invaded by British forces—designers, actors, singers and musicians—all armed with sophisticated style and accents and all of them marvelously and exotically “foreign.”

Dominating the airwaves were tunes from some of the greatest British rock and pop legends. Musical acts ranging from buoyant pop to harder-edged rock plus the most impressive guitar band in rock music climbed the charts and changed not only what Americans listened to, but also how we thought, dressed and lived. Time Life put together the essential music collection that celebrates this new sound that captured our hearts: THE BRITISH INVASION.

WHY BUY
8 CDs plus 1 DVD: Featuring 12 full-length performances from the world famous Ed Sullivan Show featuring the Beatles and The Rolling Stones.Essential collection: 122 influential British tracks in all—over 6 hours of hit music.Original songs by the original artists.Also get a full-color, 24-page booklet chronicling this unprecedented and unparalleled period of music history.Everything comes in a matching collector’s box.Over $2.5 million already in DRTV spending!
FEATURED ARTISTS:
Eric Burdon and the Animals, The Kinks, Herman’s Hermits, The Who, The Beatles, Gerry and the Pacemakers, Rod Stewart, The Mindbenders, Elton John, The Troggs, Marianne Faithful, The Yardbirds, Deep Purple, The Spencer Davis Group, Chad & Jeremy, Mott the Hoople, Peter & Gordon and many more.

For the Complete Track Listing
Loading offers ...
* The prices and shipping costs may have changed since the last update. It is technically not possible to update the prices in real time. The time of purchase on the Website of the seller is used as the reference.

Big Game
Vintage: The Very ...
Beatles for Sale ...
Amazing Adventures of
Blowing the Fuse: ...
Odyssey into the ...
In Through The ...
We Lost the ...
Surrealistic Pillow
Catch The Rainbow: ...
Tom & Jerry
The Definitive Soul ...
The Basement Tapes ...
Natural Progressions (Limited ...
The Least We ...
We use cookies to ensure that we give you the best experience on pricepirates.com. Privacy Policy