In Through The Out Door (Deluxe CD Edition) 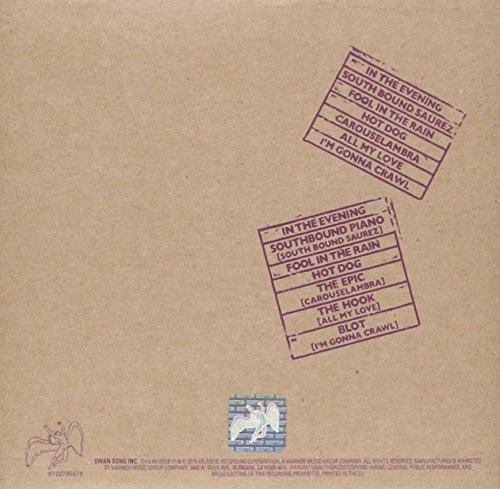 In Through The Out Door topped the U.S. and UK album charts and has since been certified six-times platinum. Sadly, it would be the last album that Led Zeppelin recorded prior to drummer John Bonham s passing the following year. Among the seven album tracks are Fool In The Rain and All My Love, two songs that remain rock radio staples to this day.

The album s companion audio disc features an unreleased rough mix of every track from the original album, including early versions with working titles such as The Hook ( All My Love ), The Epic ( Carouselambra ), and Blot ( I m Gonna Crawl ).

The Super Deluxe Boxed Set includes Remastered album on CD in vinyl replica sleeve, Companion audio on CD in card wallet, Remastered album on 180-gram vinyl in a sleeve replicating first pressing, Companion audio on 180-gram vinyl, High-def audio download card of all content at 96kHz/24 bit, Hard bound, 72+ page book filled with rare and previously unseen photos and memorabilia & High quality print of the original album cover, the first 30
Loading offers ...
* The prices and shipping costs may have changed since the last update. It is technically not possible to update the prices in real time. The time of purchase on the Website of the seller is used as the reference.

Broken Arrow
The Beatles - ...
Blues for Greeny
AC / DC: Live At ...
Carmina Burana
The Basement Tapes ...
The Continuing Story ...
Vintage: The Very ...
Catch The Rainbow: ...
Live in Japan ...
We Lost the ...
Frampton Comes Alive! ...
The Definitive Soul ...
Homeland
The Freewheelin' Bob ...
We use cookies to ensure that we give you the best experience on pricepirates.com. Privacy Policy