The Decline and Fall of Nokia 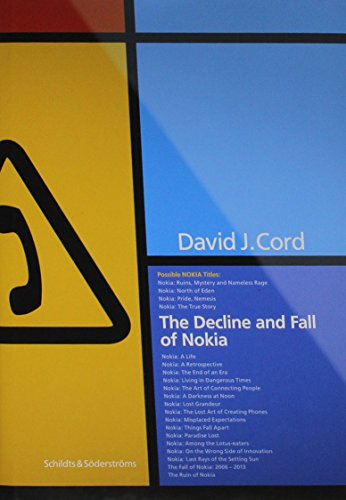 EAN
9789515233202
ISBN
9515233208
Binding
Hardcover
Dimensions
L 8.3 x W 6 x H 1.1 inches
Edition
1st
ProductGroup
Book
PublicationDate
2014-04-09
Weight
105 Hundredths Pounds
The first book about Nokia written after the Microsoft deal.
Nokia s fall from the pinnacle of the mobile phone industry was unprecedented in both its rapidity and its extent. Now for the first time the true, comprehensive story is told of the decline and fall of Finland s greatest company.
The Decline and Fall of Nokia details Jorma Ollila s retirement, Olli-Pekka Kallas­vuo s new role as CEO and the final years of unqualified success. Nokia s strateg­y is to drive digital convergence through their expansion into personal electronics as well as into content and services. It works well at first.
Weaved throughout the narrative are explorations of Nokia s structure and culture, the company s relationship with Finland, and reflections upon successes and mis­takes.
Apple s iPhone, Google s Android and low-cost competitors disrupt the market, and Nokia s attempts to correct their worsening situation are increasingly futile. Stephen Elop s choice of the Windows Phone operating system is a catastrophe which results in the sale of the handset business to Microsoft. Yet there is still a future, both for the devices business and for the new, slimmer Nokia.
The Decline and Fall of Nokia is based upon exhaustive research and dozens of interview­s. Journalists, financial analysts, competitors, politicians, union leaders, technology experts and Nokia insiders from modest engineers to the highest executive­s have told their stories
Loading offers ...
* The prices and shipping costs may have changed since the last update. It is technically not possible to update the prices in real time. The time of purchase on the Website of the seller is used as the reference.