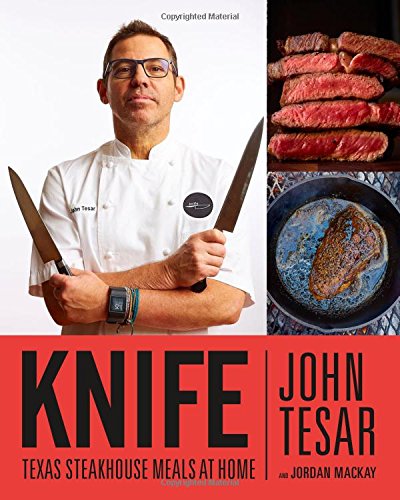 “I've had some phenomenal meals at Knife. Tesar really knows how to cook a steak, and this great book shows you how he does it!” – Aaron Franklin, author of The New York Times bestseller, Franklin Barbecue

No one cooks a steak like legendary chef John Tesar. In his first ever cookbook, Knife reveals Chef Tesar’s secrets to cooking the purest, beefiest, most delicious steak you’ve ever tasted. Infused with the flavor of Texas and Tesar’s culinary genius, Knife goes “Back to the Pan, ” and shows you the method for cooking the perfect steak. Tesar doesn’t stop at steak, though; this book is full of recipes for cooking lamb, pork, veal, and the best burgers ever. Tesar also offers up the recipes to his signature sides: Roasted Okra, Avocado Fries, and Bacon Jam, and foolproof versions of classic sauces. With recipes for your favorite juicy cuts of meat, as well as techniques for making mouthwatering dishes from underrated cheaper cuts

Bouchon Bakery (The ...
The Pioneer Woman ...
Camping Recipes: Foil ...
Glow Pops: Super-Easy ...
Forks Over Knives ...
Food Storage for ...
From Freezer to ...
Canning and Preserving ...
The French Laundry ...
King Solomon's Table: ...
French Lessons: Adventures ...
KitchenAid Recipe Collection ...
The Scotch Whisky ...
KitchenAid Recipe Collection ...
Steak: One Man's ...
We use cookies to ensure that we give you the best experience on pricepirates.com. Privacy Policy