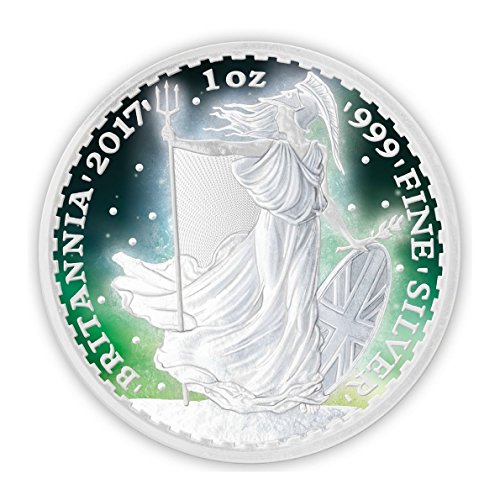 EAN
8435408917827
Brand
Mint
Frozen Britannia Aurora Rhodium £2 1oz rhodium plated .999 pure silver coin.
This beautiful new coin issue features a frozen Britannia with an exceptional colouration of green. The coin is completely plated with rhodium and UV Printing. Fifth coin in series.
Mintage limited to 500 pieces worldwide. With luxury box and COA.
Britannia is an ancient term for Roman Britain and also a female personification of the island. The name is Latin, and derives from the Greek form Prettanike or Brettaniai, which originally designated a collection of islands with individual names, including Albion or Great Britain; however, by the 1st century BC Britannia came to be used for Great Britain specifically. In AD 43 the Roman Empire began its conquest of the island, establishing a province they called Britannia, which came to encompass the parts of the island south of Caledonia (roughly Scotland). The native Celtic inhabitants of the province are known as the Britons. In the 2nd century, Roman Britannia came to be personified as a goddess, armed with a trident and shield and wearing a Corinthian helmet.
The Latin name Britannia long survived the Roman withdrawal from Britain in the 5th century, and yielded the name for the island in most European and various other languages, including the English Britain and the modern Welsh Prydain. After centuries of declining use, the Latin form was revived during the English Renaissance as a rhetorical evocation of a British national identity. Especially following the Acts of Union in 1707, which joined the Kingdoms of England and Scotland, the personification of the martial Britannia was used as an emblem of British imperial power and unity. She was featured on all modern British coinage series until the redesign in 2008, and still appears annually on the gold and silver "Britannia" bullion coin series.
Loading offers ...
* The prices and shipping costs may have changed since the last update. It is technically not possible to update the prices in real time. The time of purchase on the Website of the seller is used as the reference.