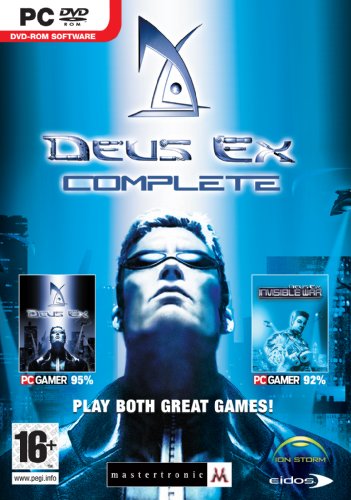 by Mastertronic Ltd
New from:
US $15.00
Used from:
US $3.66
Shipping:
see website
Prices may incl. VAT *
Last refresh Aug/29/2019 08:07 PM
Go to Amazon.com
or
Compare prices via EAN
or
Search product at eBay
EAN
5050740023154
Brand
Mastertronic Ltd
Deus Ex is one of the most influential games of all time. A mix of RPG and FPS elements that has often been imitated, but never bettered, no game allows the user a greater freedom to play their own way.

Deus Ex Complete sees both games in the ground-breaking collection - Deus Ex and Deus Ex Invisible War - brought together. Experience two of the greatest games ever in one stunning package.

"A great experience thats a blast from the past and a taster for things to come... Great mix of role playing and combat" (Total PC Gaming 8/10)

"At its best, Deus Ex Invisible War takes you closer to the idea of pure, unrestrained player expression than anything else. Most games state This is what you must do. Invisible War asks What do you want to do'" PC Gamer, Game of the Month

Video Games
Accessories
Digital Games
Kids & Family
Legacy Systems
Mac
Microconsoles
Nintendo 3DS & 2DS
Nintendo DS
Nintendo Switch
Online Game Services
PC
PlayStation 3
PlayStation 4
PlayStation Vita
Sony PSP
Wii
Wii U
Xbox 360
Xbox One
* The prices and shipping costs may have changed since the last update. It is technically not possible to update the prices in real time. The time of purchase on the Website of the seller is used as the reference.
We use cookies to ensure that we give you the best experience on pricepirates.com. More info