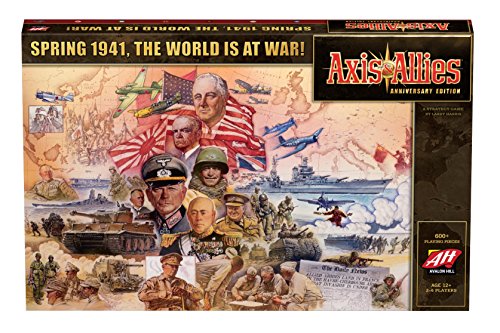 by Avalon Hill
New from:
US $70.98
Used from:
US $69.56
Shipping:
see website
Prices may incl. VAT *
Last refresh Feb/13/2019 01:22 AM
Go to Amazon.com
or
Compare prices via EAN
or
Search product at eBay
EAN
0630509612710
Brand
Avalon Hill
Ten years after it first appeared, the Axis & Allies Anniversary Edition returns in an updated version to celebrate the 50th Anniversary of the Avalon Hill brand. The Axis & Allies Anniversary Edition will feature new sculpts for four of the game pieces and the largest Axis & Allies board ever produced, measuring 24 by 46 inches. The game includes more than 650 plastic minis, packaged in six country-specific storage boxes, 14 dice, game tokens, paper money, and plastic markers. It is intended for 2 to 6 players, ages 12 and up, and takes about 6 hours to play.

Created by Larry Harris, Axis & Allies has been a stalwart icon in the tabletop wargame community since its initial release in 1981. Using plastic models to represent various types of units, the game recreates the entirety of World War II on the tabletop.

A hard-to-find Anniversary Edition of the game was released in 2008, featuring new units and a larger game board. Now Wizards of the Coast is re-producing this version of Harris’ masterpiece with an updated rulebook that streamlines some elements of gameplay and adds cruisers as a naval unit. The game also features a sixth playable position, with Italy joining the Axis powers as a full partner. On the Allied side, the USA takes control of the Chinese forces resisting the Japanese invasion.