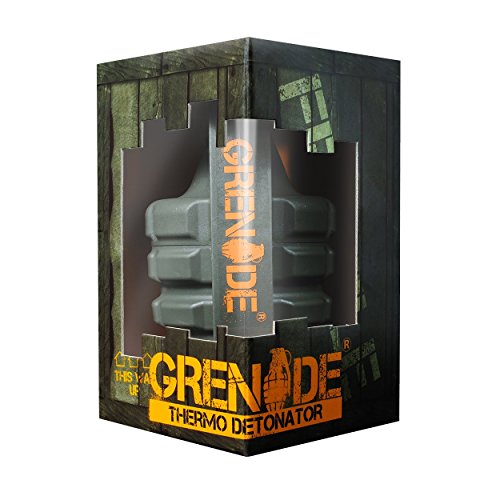 Grenade Thermo Detonator is a fat-loss product that combines scientifically researched ingredients designed to target body fat and preserve maximum lean muscle. It’s obvious, you want to keep all of your hard-earned muscle, while improving your energy and performance while blasting away the excess fat! That is exactly the philosophy behind Grenade Thermo Detonator, to ‘Declare War on Fat’, not muscle!

Thermo Detonator combines only the highest quality, maximum strength ingredients designed to ‘ramp up’ your metabolic rate and decrease your appetite without causing the jitters. It delivers a sustained release of energy and alertness, with less chance of a ‘come down’ or ’crash’ at the end. Rest assured that in the formulation of Thermo Detonator, only the most effective ingredients have been used. Most people who’ve been around the block know that to lose fat you have to deliver the correct signals to stimulate the hormone norepinephrine (among others), which is believed to be the body’s most important hormone in support of fat oxidation (using fat for energy). You also have to target specific parts of the brain to combat hunger. Thermo Detonator is designed to do both concurrently, while delivering improved mental and physical performance but without any nasty side effects.*

So, if you want the most powerful dosages of the most effective fat loss ingredients along with a steady stream of energy and alertness but you also want to hang onto your hard-earned muscle, no product declares war on fat like Grenade Thermo Detonator

Green tea, despite its modest name, contains certain active polyphenols that have been scientifically-demonstrated to have significant physiological effects, including fat loss, performance improvement and moderation of damaging cellular oxidation (antioxidant effects). Of particular interest is the catechin compound “epigallocatechin gallate”, which has been extensively investigated in several scientific studies and may be the most important legal, natural molecule in the war on fat! The specific green tea material used in Grenade Thermo Detonator has been manufactured to optimize levels of this compound.

This ingredient is another custom-processed extract also known as citrus aurantium. Its principal active extract is synephrine, which is a sypathomimetic, meaning that it stimulates the hormones involved in mobilizing and oxidizing (burning) energy and it has been specifically suggested to enhance lipolysis (fat breakdown).* N-methyltyramine and tyramine have the ability to release catecholamines, which are the most powerful fat loss hormones in the human body. Octopamine is the N-methylated analogue of synephrine and it also has the ability to stimulate fat breakdown.

Caffeine Anhydrous is a xanthine alkaloid that is well known in the scientific literature to mobilize fat from fatty tissue and to increase physical performance and mental focus.

The extract of grapefruit seed, dihydroxybergamottin, is known to prolong the effects of various compounds involved in the fat loss process.

Prominent weight loss scientists have investigated the considerable research on capsaicin-containing natural ingredients and suggest that they can both increase energy expenditure and fat oxidation (fat loss) so as to decrease the energy balance equation.* This would of course be expected to reduce body fat levels.

The scientific literature describes evodia fruit as a “hot nature” herb. Evodiamine is currently undergoing intensive investigation for its “thermogenic”, appetite-suppressing and weight loss effects that have already been suggested in the rodent model.* These effects suggest increased fat loss and calorie burning along with decreased food cravings.

Traditionally used to support sexual health, yohimbine is suggested to increase the mobilization of fat and the secretion of fat-metabolizing hormones in healthy men.* Yohimbine appears to deliver its effects by blocking off the alpha-2 adrenoreceptor, which prolongs the metabolism of norepinephrine – the body’s most potent fat loss hormone.

Raspberry ketones work much like capsaicin and evodia and they are also being studied for their ability to resist fat gains in test subjects which have been fed high-fat diets.

This amino acid may help to elevate levels of the appetite-suppressing hormone cholecystokinin (a.k.a. CCK) and may promote better mood and attention levels.

In addition to supporting good blood flow and its antioxidant effects, it has been suggested that cocoa flavanols may support parameters associated with insulin function and healthy body composition.

Phenethylamine is directly involved in the release of not only norepinephrine (which has already been discussed for its fat loss effects) but also dopamine. Higher dopamine levels are associated with improved mood and concentration.

Forskolin has a direct influence on adenylate cyclase, this enzyme activates a second messenger called cAMP, which promotes the breakdown of fat in fat cells. This has been demonstrated in both humans and animals. It has also been suggested to reduce body fat gains in adult humans.

Health & Household
Baby & Child Care
Health Care
Household Supplies
Medical Supplies & Equipment
Products
Sexual Wellness
Sports Nutrition
Stationery & Gift Wrapping Supplies
Vision Care
Vitamins & Dietary Supplements
Wellness & Relaxation
* The prices and shipping costs may have changed since the last update. It is technically not possible to update the prices in real time. The time of purchase on the Website of the seller is used as the reference.
We use cookies to ensure that we give you the best experience on pricepirates.com. Privacy Policy