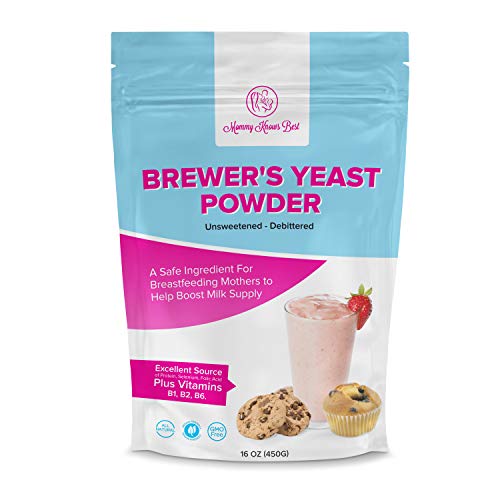 Brewer's Yeast has been known as a "Super Food" for many years due to its highly digestible protein level, key amino acids, minerals, B vitamins, selenium, and chromium; however, it has not been readily available for until now.

Brewer's Yeast is a highly nutritious dietary supplement that contains protein, iron, B-vitamins, as well as selenium and other trace materials.

Brewers Yeast is believed to be a galactogogue, which is a supplement breastfeeding mothers use to support lactation and make more breast milk. It is commonly used by breastfeeding moms to help boost milk supply. It has been used for generations for milk production as well as an array of additional health benefits.

It comes from a fungus called Saccharomyces cerevisiae. It is used for baking, brewing beer, and making wine, because of its ability to increase energy levels and elevate mood.

Mommy Knows Best Brewer's Yeast for Lactation is derived from the fermentation of beer. When yeast makes alcohol during the fermentation of beer, it eats and metabolized carbohydrates and makes key amino acids with the yeast cell along with other key vitamins. After the beer is made, the leftover yeast is cleaned, dried, and is in the form of dried brewer's yeast. There is another form of yeast called Nutritional Yeast which is manufactured and is derived from the yeast eating molasses

Health & Household
Baby & Child Care
Health Care
Household Supplies
Medical Supplies & Equipment
Products
Sexual Wellness
Sports Nutrition
Stationery & Gift Wrapping Supplies
Vision Care
Vitamins & Dietary Supplements
Wellness & Relaxation
* The prices and shipping costs may have changed since the last update. It is technically not possible to update the prices in real time. The time of purchase on the Website of the seller is used as the reference.
We use cookies to ensure that we give you the best experience on pricepirates.com. Privacy Policy