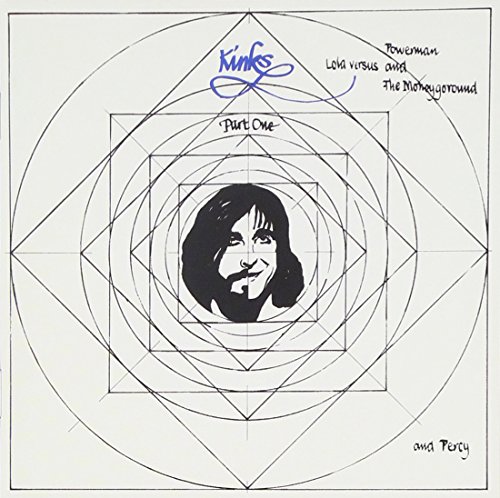 Lola Versus Powerman and the Moneygoround, Part One

by Sanctuary
New from:
US $24.79
Used from:
US $23.95
Shipping:
see website
Prices may incl. VAT *
Last refresh Aug/11/2018 10:14 PM
Go to Amazon.com
or
Compare prices via EAN
or
Search product at eBay
EAN
0881034111593
Brand
Sanctuary
The Kinks are to celebrate the 50th anniversary of their very first US hit single 'You Really Got Me' with an extensive re-release programme covering their classic 1964-1971 catalogue.
The Kinks sound-tracked the sixties with the hit singles You Really Got Me, Tired Of Waiting For You and Sunny Afternoon as well as classics All Day And All Of The Night, Dedicated Follower Of Fashion and Dead End Street.

The first album in the series will be 1970's 'Lola Versus Powerman and the Moneygoround, Part One' , one of their best-loved and most influential albums. This 2-CD reissue expanded edition comes with Mono and Stereo mixes as well as unreleased material and alternative versions, all re-mastered from original tapes by Kinks archivist Andrew Sandoval. The booklet, designed by award winning art director Phil Smee, comes packed with rare and unreleased images from the era plus new extensive liner notes written by Peter Doggett. Disc 2 features the 1971 soundtrack album Percy which is also packed with fantastic bonus content.
'Lola Versus Powerman and the Moneygoround, Part One' a conceptualized album, takes a satirical look at the various facets of the music industry including song publishers, unions, the press, accountants, business managers, and the road. Musically Lola Versus Powerman is varied, drawing on the genres of folk, hard rock, and traditional British music hall.

Although it appeared during a transitional period for The Kinks, Lola Versus Powerman was a success both critically and commercially for the group, charting in the Top 40 in America and helping restore them in the public eye. It contained two hit singles: Lola, which reached the top 10 in the US and UK, and Apeman, which peaked at number 5 in the UK.

Lola Versus Powerman was acclaimed by the music press. New Musical Express called ' Davies ... one of the finest writers in contemporary rock'; and praised the record's British styles and originality. Melody Maker's interpretation of Lola Versus Powerman was Davies 'taking a cheeky nibble' at the pop music business; they continued that 'The music's pure Kinks simplicity but it works'.

The Lola Versus Powerman album has grown in stature and become a touchstone for many of the musicians they have influenced, from David Bowie to Mumford & Sons via Damon Albarn and Paul Weller. It also influenced the likes of filmmaker Wes Anderson who used three of the album tracks, This Time Tomorrow, Strangers and Powerman, in his film, The Darjeeling Limited.
It will be the prelude to a full-scale reissue programme paying tribute to one of the greatest and most influential UK bands yet, and including Kinks favourites, archive material and more, alongside the evergreen A Well Respected Man, the much-covered Days and the epochal Waterloo Sunset, considered by many to be the definitive London song and one of the finest compositions from the pen of Kinks chief songwriter Ray Davies who will celebrate his 70th birthday this June.

The Kinks have provided hit material for artists as diverse as Herman's Hermits Dandy The Jam David Watts and The Fall Victoria as well as sensational chart debuts for Van Halen You Really Got Me and The Pretenders Stop Your Sobbing. This demonstrates how far ahead of their time The Kinks were and how timeless their music has remained. In 1990, the four founder members Ray Davies, Dave Davies, Pete Quaife and Mick Avory were inducted into the Rock and Roll Hall of Fame by Graham Nash