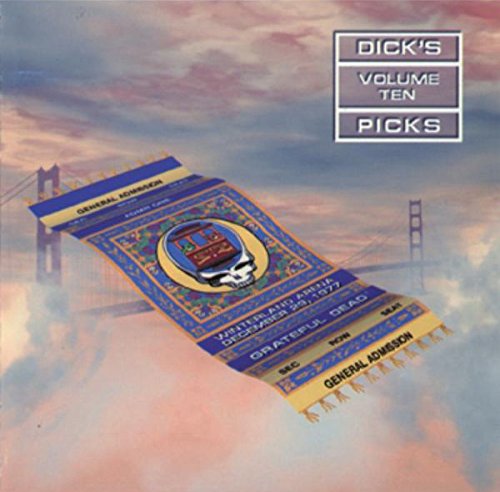 by Johnny B
New from:
US $99.99
Used from:
US $70.00
Shipping:
see website
Prices may incl. VAT *
Last refresh Aug/11/2018 08:12 PM
Go to Amazon.com
or
Compare prices via EAN
or
Search product at eBay
EAN
0848064002147
Brand
Johnny B
GRATEFUL DEAD: Dick's Picks Vol. 10 Winterland Arena December 29, 1977
Starting with Vol. 36, we have been releasing the Dick's Picks series in reverse order, but, with we are putting out Vol. 10 now to honor one of the most hallowed Grateful Dead traditions: the run of shows the band would put on in the Bay Area the last week of December leading up to the year's end. With the exception of the years 1973-1975, the Dead always could be found around town playing a New Year's Eve show, usually as part of a combo bill with other Bay Area bands, but starting in 1977, the year of this show, the group began to headline a series of concerts the last week of the year, a ritual they continued for 15 straight (or not-so-straight) years. And of all those concerts, this one, taking place at Winterland Arena the year before the Dead closed the venue for good on New Year s Eve, has long been regarded as the musical high water mark of the band's end-of-year festivities. Arguably the most consistent concert in the Dick's Picks series, the show opens with one of the strongest versions of "Jack Straw" extant and doesn't look back, with the return (after three years) of "China Cat Sunflower" a clear highlight. Dick's Picks Vol. 10 also removes two songs, "It Must Have Been the Roses" and "Sunrise, " from the 12/29 show in order to make room for a marvelous medley from the following night of "Estimated Prophet"/"Eyes of the World"/"St. Stephen"/"Sugar Magnolia;" a judicious edit indeed. There was nothing like a Grateful Dead concert and there was nothing like celebrating New Year's with them, either!