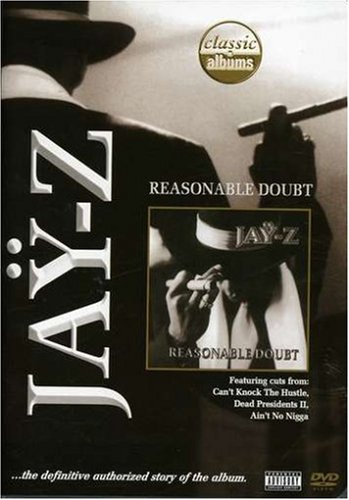 New from:
US $4.92
Used from:
US $2.95
Shipping:
see website
Prices may incl. VAT *
Last refresh Aug/11/2018 08:58 PM
Go to Amazon.com
or
Compare prices via EAN
or
Search product at eBay
EAN
0801213023097
Jay-Z has been one of the most influential figures in Black American music since the mid-nineties. Initially as a performer racking up an incredibly successful string of hit singles and albums and latterly as an executive, having taken on the presidency of Def Jam Records in 2004. "Reasonable Doubt" was his debut album and is still considered by many to be his finest achievement. A much harder hitting and edgy record than his later more polished and pop orientated releases it announced to the world that a new rap star had arrived. This latest addition to the Classic Albums series sees Jay-Z take us back through the whole creative process behind this stunning first release.

"Classic Albums: Reasonable Doubt" will be airing on VH-1 Classic this fall.

Features excerpts from: Can't Knock The Hustle (with Mary J Blige) Can I Live Dead Presidents II D'Evils Ain't No Nigga (with Foxy Brown) Coming Of Age Bring It On Regrets & more...

Bonus Features Additional interviews and demonstrations not included in the broadcast version. Original videos for "Ain't No Nigga" (with Foxy Brown) and "Can't Knock The Hustle" (with Mary J Blige).