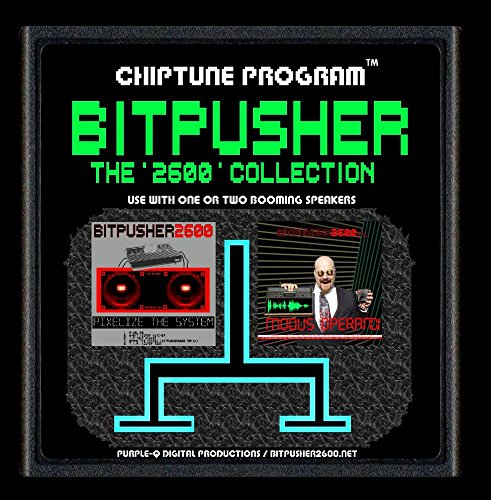 "The 2600 Collection" is a combination re-release of BitPusher's very first and second chiptune albums, as well as some additional remixes from the likes of chip music veteran Yerzmyey, Gameboy chiptuner Nursey, and the rapper Turdlehed from the band Sonik Injexion, all together on one complete disc. Direct and remastered from the original lossless studio copies, we first have "Pixelize The System", BitPusher's debut EP, originally released online and on CD January 13th of 2010. Next, comes his followup LP "Modus Operandi", originally released on April 29th of 2010.

This collection has been assembled to give chiptune listeners the most bang for their buck, and to provide the best sound quality possible from such vintage hardware. BitPusher's unique style tends to borrow from multiple genres of electronic music including hiphop, electro, 2step, technobass, and glitch. Unlike most chiptune, which you could easily pick up and drop in as background music to a level in some video game, BitPusher instead approaches the genre with the notion of making somewhat conventional beats utilizing not so conventional hardware, in this case, the Atari 2600. It could be said the TIA chip inside that console produces gritty but surprising low-end too, so the chiptune listener who prefers heavy bass in their music or enjoys subwoofer powered car audio may find something on this CD that leaves them with a smile.

At the very least, while it is a niche genre to be sure, the idea is to drop some bleeps and bloops with a little head bobbing flavor. Geeks & nerds unite....and crank it up!