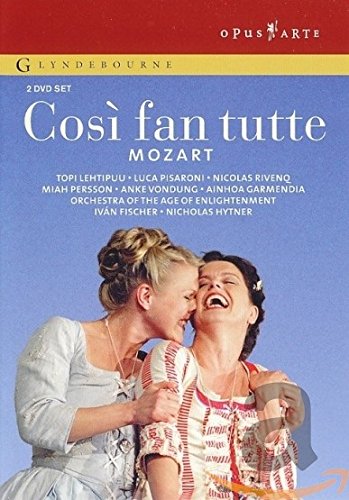 Mozart's genius in setting to music Da Ponte's comic play of love, infidelity and forgiveness marks Così fan tutte as one of the great works of art from the Age of Enlightenment. Nicholas Hytner's beautiful production for the Glyndebourne Festival in 2006, with its sure touch and theatrical know-how, lives up to its promise to be 'shockingly traditional', while Iván Fischer teases artful performances from an outstanding international cast of convincing young lovers.

Press Reviews
"When I saw this production at Glyndebourne, I thought that it was one of the three perfect operatic performances that I have ever been to. That view is only strengthened by seeing this marvellous DVD, which does the fullest justice to the brilliance of Nicholas Hytner's production, and the glorious orchestral playing and the magnificent singing under Iván Fischer." (BBC Music Magazine)


"Hytner on Opus Arte succeeded on every front, bringing out the fine qualities of the whole cast...The teamwork as ever at Glyndebourne is superb." (The Penguin Guide)

"Since 1934 when Glyndebourne revived this then-neglected work and began its run of success it has presented a succession of exemplary stagings all within the parameters of da Ponte's libretto. When this, the latest, was produced it was universally hailed: as faithful a representation of the equivocal comedy as one could wish. That's confirmed by this DVD." (Gramophone)

"Dressed in shades of sand and stone by Vicki Mortimer, and bathed in summer light by Paule Constable, Hytner's period production marries elegance, farce and psychological acuity. " (The Independent)