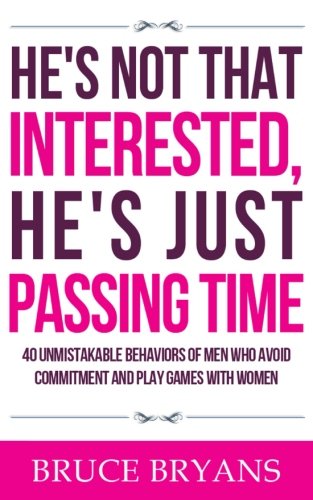 He's Not That Interested, He's Just Passing Time: 40 Unmistakable Behaviors Of Men Who Avoid Commitment And Play Games With Women

Men don’t really have “commitment issues.” At least, not in the way most women think men do. When a man tells you he has “commitment issues”, there’s a good chance that what he REALLY means is he’s not that interested in you and is just using you to pass time with until he meets someone "better."

When a man isn’t interested in a relationship with you, his “commitment issues” are nothing more than an excuse to waste your time and reap the benefits of your decision to stay with him in order to “see where this thing goes.”

It’s at this point where many women make one of the worse dating decisions possible, as they choose to remain with a half-interested man, hoping that over time they’ll be able to “lull” him into a serious commitment.

The Biggest Reason Why Men Pull Away and Suddenly Lose Interest

Women often wonder why men pull away and lose interest in a blossoming romance without so much as a warning. Though there could be a ton of reasons why a man might pull away, the most common reason for his loss of interest is this: he wasn’t THAT interested in you to begin with.

In general, even though men are more than able to commit to a woman once certain conditions in their life are met, they will not directly inform you when you’re not the right girl for them or that now isn’t the right time for them to take a woman seriously.

And because men are far more opportunistic when it comes to dating, a lot of guys won’t hesitate to take advantage of a dating situation that reaps high rewards with as little effort possible.

No matter which way you look at it, even though men don’t really have commitment issues, they don’t find it necessary or in their best interest to inform a woman when she’s nothing more than a beautiful distraction, a way to earn the respect of his peers, or just a target to sharpen his seduction skills so that he’ll be primed and ready when a “better” woman comes along.

This is the ugly truth, but there’s hope.

In this book, you’ll get an inside look at how a man thinks and interacts with a woman when he’s not that interested in her. This sort of male behavior is actually easy to spot IF you know what to look for. It’s extremely difficult for a man to waste your time and treat you like a short-term plaything without exhibiting certain unmistakable behaviors that clearly communicate that he’s trying to keep you interested…but unclaimed.

Here's what you're going to learn inside:

The seductive language men use when they want to discourage you from wanting a COMMITTED relationship.How quickly learning this ONE thing about him can tell you if he’s “unequipped” to handle a serious relationship.The pattern in a man’s dating history that IMMEDIATELY reveals if he’s a commitment-phobic time waster.How to avoid being confused by men who might love you tenderly, but would NEVER make you their girlfriend.How to stop losing sleep wondering “DOES HE LIKE ME” and get him to either take you seriously or take a hike!How observing this simple behavior reveals if he thinks you’re “THE ONE” or just “Some One” to pass time with until he finds his Ms. Right.The relationship red flags for recognizing a DEAD ON ARRIVAL romance so you don’t end up wasting your time.How to tell if a man is still secretly IN LOVE with his ex and is only one sad love song away from abandoning YOU for HER.And much, much more... Would You Like to Know More

Get started right away and discover how to tell if a man desperately wants you or if he's just not that into you.

Scroll to the top of the page and select the 'buy button' now.