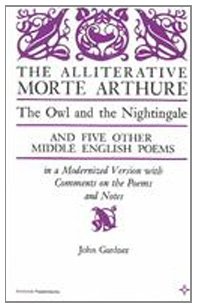 The Alliterative Morte Arthure: The Owl and the Nightingale and Five Other Middle English Poems in a Modernized Version, with Comments on the Poems (Arcturus Books, Ab116)

by Brand: Southern Illinois University Press
New from:
US $25.00
Used from:
US $1.49
Shipping:
see website
Prices may incl. VAT *
Last refresh Feb/26/2019 07:27 AM
Go to Amazon.com
or
Compare prices via EAN
or
Search product at eBay
EAN
9780809306480
ISBN
0809306484
Brand
Brand: Southern Illinois University Press
Poets of every age deal with roughly the same human emotions, and for the experienced reader poetry is interesting or not depending upon the moment-by-moment intensity of its appeal. This skillful rendering by John Gardner of seven Middle English poems into sparklingly modern verse translation—most of them for the first time—represents a selection of poems that, generally, have real artistic value but are so difficult to read in the original that they are not as well known as they deserve to be. The seven poems are: The Alliterative Morte Arthure, Winner and Waster, The Parlia­ment of the Three Ages, Summer Sunday, The Debate of Body and Soul, The Thrush and the Nightingale, and The Owl and the Nightingale.

The first four poems represent high points in the alliterative renais­sance of the fourteenth century. Morte Arthure, here translated for the first time in its entirety into modern verse, is the only heroic romance in Middle English—a work roughly in the same genre as the French Song of Roland. The other three poems have been included in the anthology as further poetic examples.

With his employment of extensive comments and notes on the poems, Gardner provides a wealth of aids to appreciation and understanding of his outstanding translations. The anthology will be of interest to general readers as well as to students.