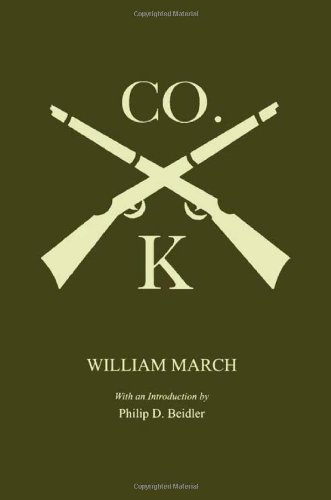 This book was originally published in 1933. It is the first novel by William March, pen name for William Edward Campbell. Stemming directly from the author's experiences with the U.S. Marines in France during World War I, the book consists of 113 sketches, or chapters, tracing the fictional Company K's war exploits and providing an emotional history of the men of the company that extends beyond the boundaries of the war itself.

William Edward Campbell served courageously in France as evidenced by his chestful of medals and certificates, including the Croix de Guerre, the Distinguished Service Cross, and the Navy Cross. However, without the medals and citations we would know of his bravery. For it is clear in the pages of Company K that this book was written by a man who had been to war, who had clearly seen his share of the worst of it, who had somehow survived, and who had committed himself afterward to the new bravery of sense-making embodied in the creation of major literary art. It is of that bravery that we still have the record of magnificent achievement