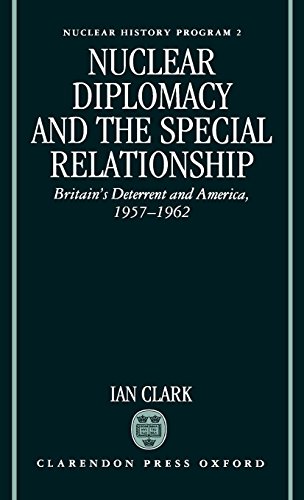 New from:
US $145.84
Used from:
US $15.12
Shipping:
see website
Prices may incl. VAT *
Last refresh Nov/23/2018 06:08 AM
Go to Amazon.com
or
Compare prices via EAN
or
Search product at eBay
EAN
9780198273707
ISBN
9780198273707
Based on a detailed analysis of newly declassified documents, this book reveals the full and fascinating story of Anglo-American nuclear relations from 1957 to 1962. This period saw the creation of a close and exclusive relationship of nuclear collaboration between Britain and the United States: an agreement was formed on atomic cooperation, facilities for U.S. nuclear submarines were established in the U.K., and U.S. missiles (including Thor and Polaris) were sold for use in the British strategic submarine force. Ian Clark argues that this partnership, though special, was fraught with tension and rivalry. In exploring this relationship, Clark examines such critical issues as British nuclear targeting of the Soviet Union, cancellation of the Blue Streak missile, the bargain over Skybolt and the Holy Loch base, and British ambitions for Polaris. His use of formerly top secret documents from Britain and the United States enable Clark to offer new and sometimes controversial interpretations of events in this dramatic period.