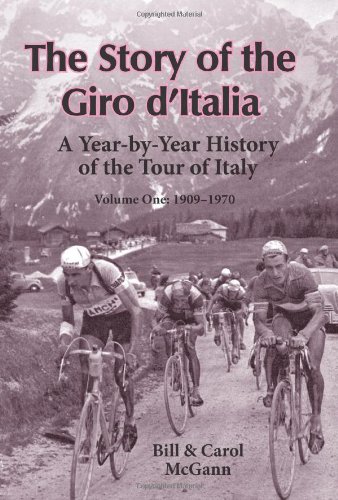 by Brand: McGann Publishing LLC
New from:
US $18.95
Used from:
US $12.88
Shipping:
see website
Prices may incl. VAT *
Last refresh Aug/07/2018 10:08 AM
Go to Amazon.com
or
Compare prices via EAN
or
Search product at eBay
EAN
9780984311767
ISBN
0984311769
Brand
Brand: McGann Publishing LLC
Author
Bill Mcgann, Carol McGann
Educational Level
Trade
ISBN-10
0984311769
ISBN-13
9780984311767
Language
English
Publication Year
20110000
The Giro d’Italia is one of the world’s most important and popular bicycle races, yet there is almost no information in English about this magical Italian race’s rich past. With “The Story of the Giro d’Italia”, the fabulous history of Italy’s national tour is at last available. Volume One takes the story of the Giro from its origin as a desperate promotional gamble by a nearly broke newspaper to Eddy Merckx’s convincing 1970 victory.

Volume 1 of “The Story of the Giro d’Italia” tells of Italy’s most celebrated riders: Costante Girardengo, the first campionissimo, or “Champion of Champions”; Alfredo Binda, who so dominated the Giro that one year he was paid by the organizers not to enter; Gino Bartali, who looked to become the dominating rider of his era; and Fausto Coppi, a fascinating personality and Bartali’s great rival, who became not only Italy’s, but the world’s finest rider.

The great rivalry between Fausto Coppi and Gino Bartali is known to many cycling fans, mostly because of their adventures in the Tour de France. But for much of bike racing’s history, the Alps have been a high wall, and Italian sponsors preferred to keep their racers at home where they could earn valuable publicity. Because of this, there is a whole world of great athletes who are virtually unknown to the non-Italian cycling fan. How about Giovanni Valetti In 1939 Valetti beat Bartali when Gino was at the very peak of his powers. Has anyone heard of Giuseppe Enrici, the Giro winner who was born in Pittsburgh Alfonsina Strada was the only woman who entered (and unofficially finished) a Grand Tour. And there was Giordano Cottur, who won a Giro stage in Trieste while guns blazed.

Clearly, this is a story that has to be told, and it’s all there in “The Story of the Giro d’Italia”.

“Bill and Carol McGann had set a high standard with their compelling and authoritative ‘Story of the Tour de France’, and now they follow up with Le Tour’s inspired Italian offspring in ‘The Story of the Giro d’Italia’. In this Volume I covering the Giro’s debut in 1909 through 1970, this work of patient research, passionate writing, and insightful analysis lays out the struggles, battles, and rivalries in detail and sweep that have made Italy’s grand tour endure. And the American audience can read about Joseph Magnania native of LaSalle, Illinoiswho rode in the 1946 Giro on the Olmo team and quietly made history as the first U.S. rider to compete in one of the grand tours in the era of dusty roads against Italy’s heroes Bartali and Coppi”. —Peter Joffre Nye, author of “The Six-Day Bicycle Races: America’s Jazz Age Sport” and “Hearts of Lions” and trustee of the U.S. Bicycling Hall of Fame