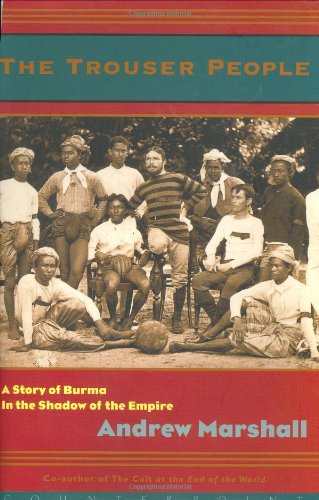 The Trouser People: A Story of Burma in the Shadow of the Empire

Part travelogue, part history, part reportage, The Trouser People is an enormously appealing and vivid account of Sir George Scott, the unsung Victorian adventurer who hacked, bullied, and charmed his way through uncharted jungle to help establish British colonial rule in Burma. Born in Scotland in 1851, Scott was a die-hard imperialist with a fondness for gargantuan pith helmets and a bluffness of expression that bordered on the Pythonesque. But, as Andrew Marshall discovered, he was also a writer and photographer of rare sensibility. He spent a lifetime documenting the tribes who lived in Burma's vast wilderness and is the author of The Burman, published in 1882 and still in print today. He also not only mapped the lawless frontiers of this "geographical nowhere"-the British Empire's easternmost land border with China-but he widened the imperial goalposts in another way: he introduced soccer to Burma, where today it is a national obsession. Inspired by Scott's unpublished diaries, Andrew Marshall retraces the explorer's intrepid footsteps from the moldering colonial splendor of Rangoon to the fabled royal capital of Mandalay. In the process he discovers modern Burma, a hermit nation misruled by a brutal military dictatorship, its soldiers, like the British colonialists before them, nicknamed "the trouser people" by the country's sarong-wearing civilians. Wonderfully observed, mordantly funny, and skillfully recounted, The Trouser People is an offbeat and thrilling journey through Britain's lost heritage-and a powerful exposé of Burma's modern tragedy.