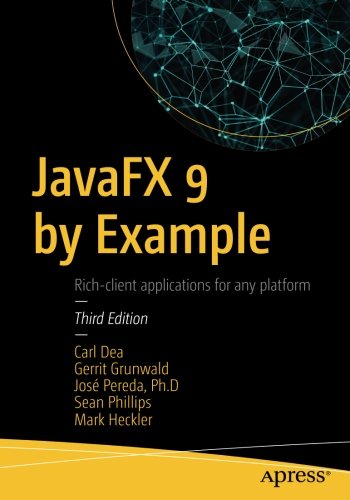 Create media-rich client applications using JavaFX 9 and the Java 9 platform. Learn to create GUI-based applications for mobile devices, desktop PCs, and even the web. Incorporate media such as audio and video into your applications. Interface with hardware devices such as Arduino and Leap Motion. Respond to gesture control through devices such as the Leap Motion Controller. Take advantage of the new HTTP2 API to make RESTful web requests and WebSockets calls.

New to this edition are examples of creating stylized text and loading custom fonts, guidance for working with Scene Builder to create visual layouts, and new content on developing iOS and Android applications using Gluon mobile. The book also covers advanced topics such as custom controls, JavaFX 3D, gesture devices, printing, and animation. Best of all, the book is full of working code that you can adapt and extend to all your future projects.

Is your goal to develop visually exciting applications in the Java language Then this is the book you want at your side. JavaFX 9 by Example is chock-full of engaging, fun-to-work examples that bring you up to speed on the major facets of JavaFX 9. You'll learn to create applications that look good, are fun to use, and that take advantage of the medium to present data of all types in ways that engage the user and lead to increased productivity. The book:

Has been updated with new content on modular development, new APIs, and an example using the Scene Builder toolIs filled with fun and practical code examples that you can modify and drop into your own projectsIncludes an example using Arduino and an accelerometer sensor to track motion in 3DHelps you create JavaFX applications for iOS and Android devicesWhat You'll Learn
Work with touch-based interfaces
Interpret gesture-based events
Use shapes, color, text, and UI controls to create a simple click and point gameAdd audio and video to your projects
Utilize JavaFX 3DCreate custom controls using CSS, SVG, and Canvas APIs
Organize code into modules using Java Platform Module System (Project Jigsaw)
Who This Book Is For
Java developers developing visual and media-rich applications to run on PCs, phones, tablets, Arduino controllers, and more. This includes developers tasked with creating visualizations of data from statistical analysis and from sensor networks. Any developer wanting to develop a polished user-interface in Java will find much to like in this book.