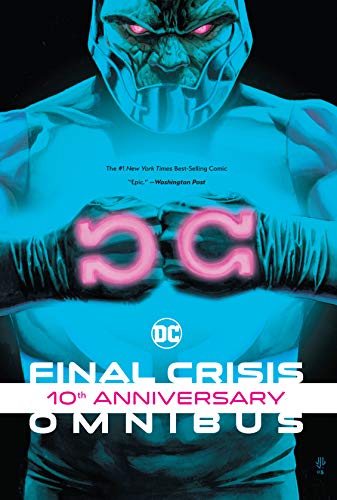 New from:
US $94.91
Used from:
US $81.68
Shipping:
see website
Prices may incl. VAT *
Last refresh Jun/14/2019 09:32 PM
Go to Amazon.com
or
Compare prices via EAN
or
Search product at eBay
EAN
9781401285036
ISBN
1401285031
From the mind of genre-defining writer Grant Morrison comes Final Crisis, one of the most epic events ever to hit the DC Universe! In this 10th Anniversary Omnibus edition, every chapter in the groundbreaking saga is presented together in chronological order for the first time ever. With stories by Grant Morrison, Geoff Johns, Greg Rucka and more comes the Final Crisis 10th Anniversary Omnibus, a deconstruction of superhero comics at large and a challenging, thought-provoking take on the modern, four-color icons.

Using the soul-destroying Anti-Life Equation, Darkseid is remaking the heroes, villains and everyday people of Earth in his dark image...and destroying the very fabric of reality itself in the process.

Now superheroes from around the world--and across the Multiverse--must make a last, desperate stand against the forces of Anti-Life. Will Earth endure And when the Crisis reaches its climax, who will make the ultimate sacrifice