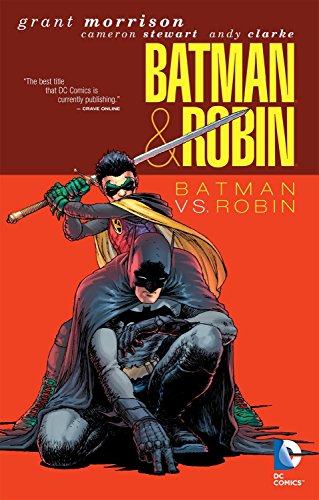 by DC Comics
New from:
US $38.40
Shipping:
see website
Prices may incl. VAT *
Last refresh Jun/14/2019 09:32 PM
Go to Amazon.com
or
Compare prices via EAN
or
Search product at eBay
EAN
9781401232719
ISBN
9781401232719
Brand
DC Comics
Grant Morrison continues his habit of teaming up with A-list, critically acclaimed artists by joining Cameron Stewart (SEVEN SOLDIERS: MANHATTAN GUARDIAN) and Andy Clarke (BATMAN: FACE THE FACE) for the next exciting chapter of the adventures of the new Dynamic Duo!

The new Batman and Robin uncover clues involving the mysterious death of Bruce Wayne before facing off against each other in a heated battle instigated by Robin's mother that both heroes will regret - if they live through it! Featuring a 3-issues storyline that ties into the best-selling BLACKEST NIGHT event titled "Blackest Knight, " this new collection is a must-have for both new readers and longtime fans of Grant Morrison's Batman epic as the superstar writer unveils more of his genre-defying masterplan!