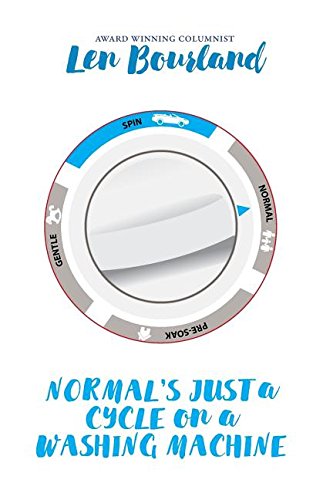 Normal's Just a Cycle on a Washing Machine: A Memoir

Award winning local humor columnist, Len Bourland was a writer/doctor's wife detailing a normal life of carpooling and raising her three young children in the halcyon 80s in a Dallas suburb known as "The Bubble." As she entered her forties, her bubble burst, and she went from a stay-at-home surgeon's wife to a single working mother hustling to make money, while raising adolescents who begin dating...and so does she. Using excerpts from her columns over the years, she invites readers to sort through their laundry with hers as both her life and society cycle through change very rapidly, although there is always "Wash, Spin, Repeat" in this rollicking memoir.

Part One: Pre-Soak introduces the family, the dog, the neighborhood and priceless anecdotes about adjusting to the upscale neighborhood of Highland Park. As the writer/mother gets noticed by the Texas Press Association and is given her own by-line she grows her audience with funny perspectives on life in the big city in Part Two: Normal. Even as she is broadcasting on NPR and her life is "busy, fun, exciting" it is also on a countdown mode. Abruptly her surgeon husband has a mid-life crisis. In Part Three: Spin, columns on divorce, depression and trying to stabilize her children going through adolescence are poignantly told with feminist undertones. Lamenting to a friend that she just wants her life to go back to being "normal, " she's advised "Honey, don't go looking for normal, normal's just a cycle on a washing machine, " hence the title of the book.

Part Four: Second Cycle spans two decades of learning a career, emptying her nest, and hilariously, having romances alongside her children. The backdrop of all of these stages of her family is the emergence of technology, consumerism, terrorism, and aging alluded to with wit and perspective. A chaotic second marriage is tersely described in staccato one liners that are as brief as the marriage in Part Five: Turbo Spin. It segues nicely to the charming conclusion in Part Six: Gentle Wash about becoming a grandmother. As a memoir, it reads like a narrative that will bring smiles as well as the occasional tear with much to inspire readers of all ages. With resilience, the author learns to make peace not only with all those hurts along the way, but also with herself in the process.

As a self-professed child of the international corporate move, she is know to many throughout the Southeast and Southwest. She often broadcast her columns on KERA national public radio while writing her feature column.This is her first book described by movie producer Judy Burch Gass, "We finally have a book to remind us how funny and remarkable life can be in spite of its challenges. Read it on the plane, give it to a friend