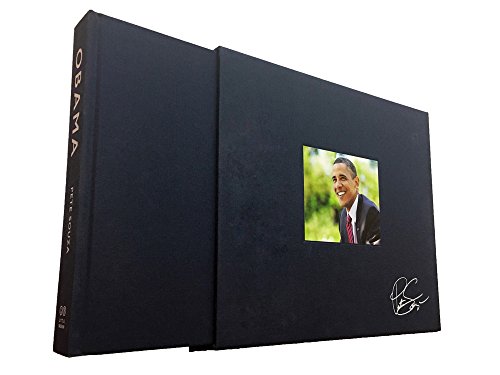 New from:
US $137.49
Used from:
US $139.17
Shipping:
see website
Prices may incl. VAT *
Last refresh Dec/10/2018 11:59 PM
Go to Amazon.com
or
Compare prices via EAN
or
Search product at eBay
EAN
9780316512596
ISBN
0316512591
ABOUT THE DELUXE EDITION:
This deluxe edition has been personally signed by Pete Souza.
This collectible edition of Obama: An Intimate Portrait will stand the test of time. It is printed on heavy fine art paper, with every photograph protected by gloss varnish; bound in rich blue cloth, stamped with foil; and protected by a durable clothbound slipcase, debossed with Souza's signature and mounted with a laminated photographic print. It also includes a separate 8-by-10-inch print of Souza's iconic photograph of the President dancing with the First Lady, suitable for framing and display in your home.
This 352-page book is 12 inches wide by 10 inches tall. It weighs more than seven pounds.
ABOUT THE BOOK:
Relive the extraordinary Presidency of Barack Obama through White House photographer Pete Souza's behind-the-scenes images and stories--some published here for the first time--with a foreword from the President himself.
During Barack Obama's two terms, Pete Souza was with the President during more crucial moments than anyone else--and he photographed them all. Souza captured nearly two million photographs of President Obama, in moments highly classified and disarmingly candid.
Obama: An Intimate Portrait reproduces more than 300 of Souza's most iconic photographs. Together they document the most consequential hours of the Presidency--including the historic image of President Obama and his advisors in the Situation Room during the bin Laden mission--alongside unguarded moments with the President's family, his encounters with children, interactions with world leaders and cultural figures, and more.
Souza's photographs, with the behind-the-scenes captions and stories that accompany them, communicate the pace and power of our nation's highest office. They also reveal the spirit of the extraordinary man who became our President. We see President Obama lead our nation through monumental challenges, comfort us in calamity and loss, share in hard-won victories, and set a singular example to "be kind and be useful, " as he would instruct his daughters.
This book puts you in the White House with President Obama, and will be a treasured record of a landmark era in American history.