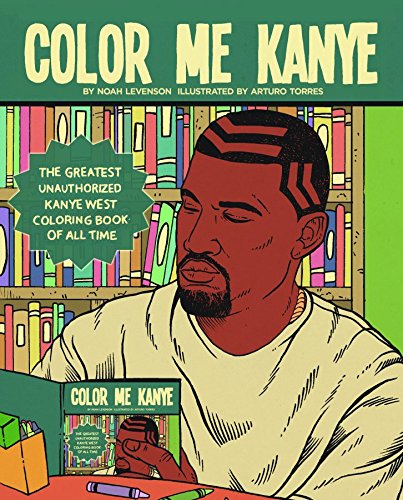 Color Me Kanye: The Greatest Unauthorized Kanye West Coloring Book of All Time

"The book is as over-the-top and entertaining as the man who inspired it."UPROXX

“We’re gonna need more crayons. There is not necessarily a lot of competition for the title of ‘Greatest unauthorized Kanye West coloring book of all time, ’ but newly announced Color Me Kanye would earn it even if there was.” FACT

“An absurd and hilarious addition to the wacky world of adult coloring books.” High Times Magazine

You know Kanye West as a visionary multimillionaire music and fashion icon. But there’s another side to Ye: He’s also a God-like revolutionary hero who’s literally saving the world.

There’s no problem he can’t solve, no achievement he can’t achieve. Global warming Kanye’s got a solution. Life threatening disease Kanye’s got a cure. Dunking on LeBron James Yep. Kanye can do that too.

Now, for the first time ever, peek inside Kanye’s heart, mind and life to see the dope-as-hell genius from the future who can find what was lost, fix what was broken, and improve everything for everyone.

Color Me Kanye: The Greatest Unauthorized Kanye West Coloring Book of All Time is the coloring book you've always wanted.

Noah Levenson is the author of Guy Code: Unleash Your Manhood. He's the former editorial director of MTV2, where he oversaw the reinvention of the channel and helped break ratings records.

Arturo Torres is the illustrator of the New York Times bestselling The Rap Year Book: The Most Important Rap Song From Every Year Since 1979, written by Shea Serrano.