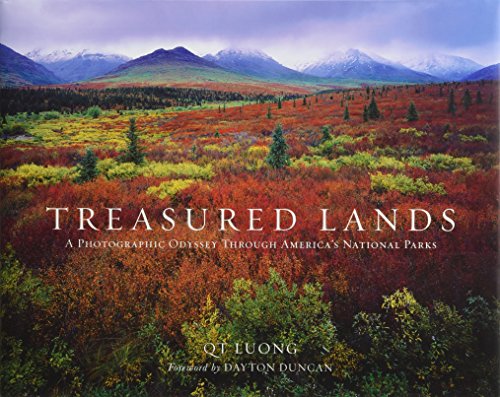 by Cameron Company
New from:
US $44.19
Used from:
US $32.48
Shipping:
see website
Prices may incl. VAT *
Last refresh Nov/25/2018 11:11 PM
Go to Amazon.com
or
Compare prices via EAN
or
Search product at eBay
EAN
9781944903008
ISBN
1944903003
Brand
Cameron Company
Beautiful, most complete visual tour of all 59 US National Parks in a coffee-table book, with location notes for each photograph. Winner of 6 national book awards.
It is said that a photograph helped launch the national parks. After Congress viewed photos of Yosemite, President Lincoln was moved to sign a bill that paved the way for the U.S. National Park Service. In Treasured Lands: A Photographic Odyssey Through America's National Parks, photographer QT Luong pays tribute to the millions of acres of protected wilderness in our country's 59 national parks.

Luong, who is featured in Ken Burns's and Dayton Duncan's documentary The National Parks: America's Best Idea, is the most prolific and versatile photographer working in the national parks and the only one to have made large-format photographs in each of them. In an odyssey that spanned more than 20 years and 300 visits, Luong focused his lenses on iconic landscapes and rarely seen remote views, presenting his journey in this sumptuous array of more than 500 breathtaking images.

Accompanying the collection of scenic masterpieces is a guide that includes maps of each park, as well as extended captions that detail where and how the photographs were made. Designed to inspire visitors to connect with the parks and invite photographers to re-create these landscapes, the guide also provides anecdotal observations that give context to the pictures and convey the sheer scope of Luong's extraordinary odyssey. The guide is also available as a PDF formatted for use on mobile devices, and owners of the book are offered the option to download it for a nominal fee.