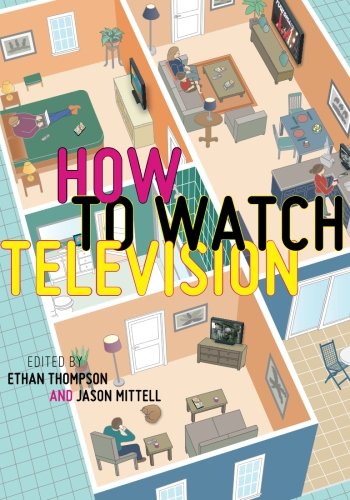 How To Watch Television

by Brand: NYU Press
New from:
US $25.33
Used from:
US $16.56
Shipping:
see website
Prices may incl. VAT *
Last refresh Jan/17/2019 07:44 PM
Go to Amazon.com
or
Compare prices via EAN
or
Search product at eBay
EAN
9780814763988
ISBN
0814763987
Brand
Brand: NYU Press
We all have opinions about the television shows we watch, but television criticism is about much more than simply evaluating the merits of a particular show and deeming it 'good' or 'bad.' Rather, criticism uses the close examination of a television program to explore that program's cultural significance, creative strategies, and its place in a broader social context.

How to Watch Television brings together forty original essays from today's leading scholars on television culture, writing about the programs they care (and think) the most about. Each essay focuses on a particular television show, demonstrating one way to read the program and, through it, our media culture. The essays model how to practice media criticism in accessible language, providing critical insights through analysis--suggesting a way of looking at TV that students and interested viewers might emulate. The contributors discuss a wide range of television programs past and present, covering many formats and genres, spanning fiction and non-fiction, broadcast and cable, providing a broad representation of the programs that are likely to be covered in a media studies course. While the book primarily focuses on American television, important programs with international origins and transnational circulation are also covered.

Addressing television series from the medium's earliest days to contemporary online transformations of television, How to Watch Television is designed to engender classroom discussion among television critics of all backgrounds.

Ethan Thompson is Associate Professor at Texas A&M University - Corpus Christi. He is the author of Parody and Taste in Postwar American Television Culture, and co-editor of Satire TV: Politics and Comedy in the Post-Network Era.