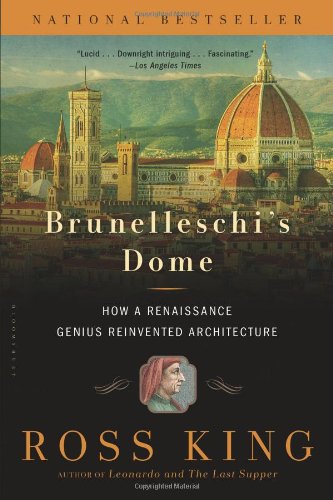 On August 19, 1418, a competition concerning Florence's magnificent new cathedral, Santa Maria del Fiore--already under construction for more than a century--was announced: "Whoever desires to make any model or design for the vaulting of the main Dome....shall do so before the end of the month of September." The proposed dome was regarded far and wide as all but impossible to build: not only would it be enormous, but its original and sacrosanct design shunned the flying buttresses that supported cathedrals all over Europe. The dome would literally need to be erected over thin air.

Of the many plans submitted, one stood out--a daring and unorthodox solution to vaulting what is still the largest dome (143 feet in diameter) in the world. It was offered not by a master mason or carpenter, but by a goldsmith and clockmaker named Filippo Brunelleschi, then forty-one, who would dedicate the next twenty-eight years to solving the puzzles of the dome's construction. In the process, he did nothing less than reinvent the field of architecture.

Brunelleschi's Dome is the story of how a Renaissance genius bent men, materials, and the very forces of nature to build an architectural wonder we continue to marvel at today. Denounced at first as a madman, Brunelleschi was celebrated at the end as a genius. He engineered the perfect placement of brick and stone, built ingenious hoists and cranes (among some of the most renowned machines of the Renaissance) to carry an estimated 70 million pounds hundreds of feet into the air, and designed the workers' platforms and routines so carefully that only one man died during the decades of construction--all the while defying those who said the dome would surely collapse and his own personal obstacles that at times threatened to overwhelm him. This drama was played out amid plagues, wars, political feuds, and the intellectual ferments of Renaissance Florence-- events Ross King weaves into the story to great effect, from Brunelleschi's bitter, ongoing rivalry with the sculptor Lorenzo Ghiberti to the near catpure of Florence by the Duke of Milan. King also offers a wealth of fascinating detail that opens windows onto fifteenth-century life: the celebrated traditions of the brickmaker's art, the daily routine of the artisans laboring hundreds of feet above the ground as the dome grew ever higher, the problems of transportation, the power of the guilds.

Even today, in an age of soaring skyscrapers, the cathedral dome of Santa Maria del Fiore retains a rare power to astonish. Ross King brings its creation to life in a fifteenth-century chronicle with twenty-first-century resonance.